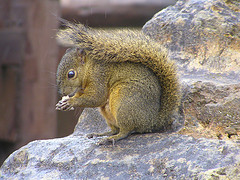 The news out of the Middle East just gets weirder by the day – often with an animal flavour to it, so it seems. Less than a fortnight after the British military had to deny deploying a crack team of attack badgers into Basra, the Iranian government has announced that they have captured a number of squirrels with GPS and other spying kit embedded in their bodies. I’m very skeptical as to how true this story will turn out to be, but it’s still one hell of a headline. [Image by Ogwen]