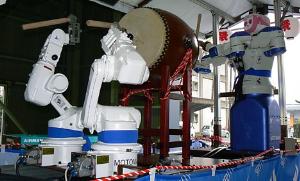 Pretty soon we won’t have to do anything for ourselves. Well, OK, that’s an exaggeration, but the list of tasks that robots can now perform as well as a human grows longer by the week. At the more mundane end of the scale (except in cultural terms, perhaps) Yaskawa Electric have fixed up one of their Motoman industrial robots to play taiko drums at a Japanese festival. Arguably more beneficial to the well-being of our species is the Sensei robotic arm at London’s St Mary’s Hospital, which is performing joystick-controlled heart surgery – with developers confident that a fully automated version is not far off.