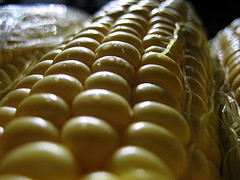 Via PZ Myers: an article at Rolling Stone that looks at the sudden swing into favour of ethanol as an alternative fuel in the US … does the word ‘ subsidies’ ring any bells? There’s little doubt we need alternatives to crude oil derivatives, but we should probably be picking them on the merits of their environmental impact, rather than how much money they can make for shady business-persons … and how many votes they can garner in an election year. [Image by WayTru]

Edited for extra: the panic is over, we don’t need to switch to ethanol. A biotech start-up claims it will have created bacteria capable of making “petroleum-like fluids” within the next three to five years. Rather than voicing my opinion on the plausibility or practicality of such a solution, I’ll instead point out that Julian May posited that very idea in her 1988 novel, Intervention.

One thought on “The Great Ethanol Swindle”