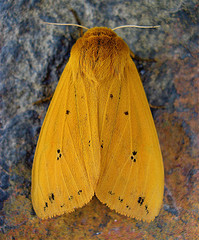 I’ve blogged this here before, but it deserves mentioning once again just for its sheer science fictional majesty – good old DARPA have been implanting minute electro-mechanical devices into moth pupae, so that when the insects hatch they’re fully wired for … well, that’s the thing. They’re still working on a viable application for the idea (which is an odd methodology, but what the hell, they have the budget for it), but the idea of using the bugged bugs as some sort of reconnaissance companion for fighter pilots seems to be the way they want to go. [Gizmodo]

By the way, Wired’s Danger Room blog is on-site covering the current DARPATech convention, should you hunger for more weirdness of a similar ilk. [Image by Jurvetson]