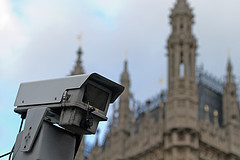 Call me all the rude versions of “paranoid liberal” you want, but I’m getting very distressed at my homeland’s propensity for spying on its own citizens. The silent airborne surveillance drones I mentioned a while ago are now being used to maintain order at music festivals. And while you can argue that there’s a degree of reasonable logic to that, you can’t say the same for the school uniform manufacturer that is seriously considering producing a range of bugged clothing to enable parents to know where their kids are at all times. [Image by RightIndex]

I never realised that freedom was a finite resource; it would appear the failed efforts of our glorious leaders to export it to the Middle East have led to a major deficit at home. But hey, why worry? After all, if I’m doing nothing wrong, I have nothing to fear, right?

2 thoughts on “Welcome to the United Kingdom of Ubiquitous Surveillance”