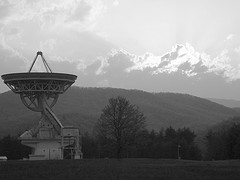 I’m late to the party as far as announcing the arrival of the new Google Earth features that let you explore the sky as well as the ground, but I’m not going to let that stop me. Once the excitement of roaming the real stars has faded, however, you can skip on over to Galaxiki – which, as the name suggests, is a wiki-based community that is building a fictional galaxy by describing the star systems within it.[BoingBoing]

I quite like the idea of being able to create my own solar system … for one thing, I’d make sure that I avoided picking a sun that does freaky stuff to its planets with low-frequency waves. We’re all doomed! Possibly. [Image by jesiehart]