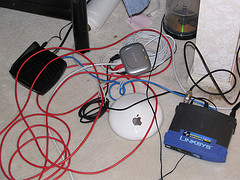 The planned launch in January 2008 of Tribler, a variation on the BitTorrent protocol, is being hailed by the software’s creators as a way of sharing the burden of peer-to-peer networks more fairly, by treating bandwidth as a commodity to be traded on a global market. Which sounds great to me, especially as it’s open source … but isn’t it somewhat inevitable that someone will make a hacked version with the altruism overridden?

But leeching is hardly a new phenomenon, and by and large the web’s development as a resource for the average user can be largely ascribed to altruistic behavior by participants – Victor Keegan at The Guardian thinks the gift economy of the web actually promotes overall economic welfare. I’m inclined to agree, but I can think of a few counter-examples – how about you? [Image by Peter Kaminski]

One thought on “Economics2.0 – bandwidth as currency?”