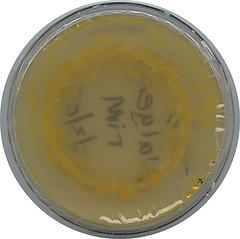 It sounds like a crazy idea – but then that’s what they said about penicillin. Scientists from the UK are planning to use a close relative of the E. coli virus as a ‘targeted antibacterial agent’ to combat increasingly drug-resistant bacterial infections like the infamous MRSA. I’m sure they know what they’re doing … but I’m guessing doctors will want to keep fairly quiet on the antibiotic’s origins at first. [Image by Justin Baeder]