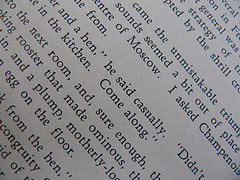 While there is still no official word from the Big G itself, word on the street seems to suggest that Google will begin charging for full access to texts through its BookSearch service. Given the amount of hassle they’ve been getting from publishers and copyright owners about the Universal Library project, we probably shouldn’t be surprised … but I also expect there’ll be more to the idea than has been initially reported once an official announcement arrives. [Image by Laineys Repertoire]