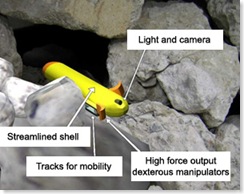 Inspired by the European mole, Robin Scott and Robert Richardson of the University of Manchester hope to develop a digging robot that could "swim" through debris to rescue people trapped under rubble after a disaster. Here’s a video of their new digging mechanism undergoing tests with a range of materials, and here’s an animation that shows how the mechanism works. A search-and-rescue robot based on the design could be ready in as little as two years.

That’s probably longer than you want to wait if you’re trapped under rubble right now, but if you’re planning on being trapped in the future, it’s good to know improved options are on the way.

Other researchers are experimenting with rescue robots that roll, walk or slither.

And then there’s the human-eating firefighter rescue robot. You have to admit, a mechanical mole sounds downright friendly next to that one.