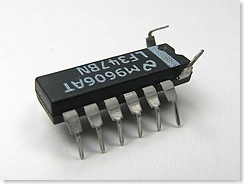 Gordon Moore has predicted the expiry of the "Law" that bears his name to occur within the next ten to fifteen years. Moore’s Law is a rule of thumb that states that the number of transistors that can be inexpensively placed on an integrated circuit doubles every two years (or thereabouts), and it has held up remarkably well since Moore coined it in the mid-sixties.

Indeed, this isn’t the first time Moore has sounded a death-knell for the Law, but as conventional electronics is inherently limited by the laws of physics, it’s plausible that it has to stop at some point. So what does this mean for the exponential theories of Singularitarians like Ray Kurzweil? Or will technologies like quantum computing pick up the ball before semiconductors drop it? [Via SlashDot][Image by oskay]