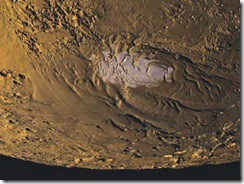 Long term readers of Futurismic will know well my frustration with the constant see-sawing of scientists over the "is Mars wet?" issue, and I’m going to spare relative newcomers the weight of my angst.

Instead, I’ll just point to a story that reports on analysis done at MIT which suggests the southern polar ice cap of Mars may actually be water and not ‘dry ice’ … and to another, dated just a few days ago, which says images from the Mars Reconnaissance Orbiter seem to indicate that certain topographical features of the Red Planet may not have been carved by water as previously suspected … although the results "don’t confirm or deny" the theory. [Image credited to NASA/MOLA Science Team]

Look, can we not arrange for some sort of moratorium on this to-and-fro guesswork until such a time as we actually have some substantial scene-of-the-crime evidence to go on, as opposed to very clever people making educated guesses based on photographs taken from orbit?