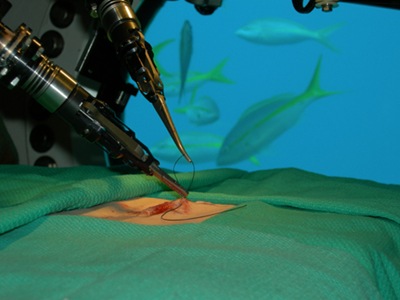 Good news for future space travelers: the world’s first demonstration of robotic surgery in a simulated micro-gravity environment takes place this week, in a collaborative effort between SRI International and the University of Cincinnati.

On four parabolic flights September 25 to 28 aboard a NASA C-9 aircraft (nicknamed the "Weightless Wonder"), a human surgeon will match suturing and similar skills with a robot surgeon tele-operated from thousands of miles away. The robot surgeon is equipped with special software that is designed to help it compensate for "errors in movement" (what you might call those pesky "oops!" moments that surgeons–and patients–just hate) due to turbulence or lack of gravity. The human surgeon is equipped with an airsickness bag.

The remote-surgery robot has already been tested on the Aquarius Underwater Laboratory, 60 feet under the water off the coast of Key Largo, where SRI demonstrated the robot could operate successfully even with a two-second latency, similar to that an Earth-based surgeon would experience if operating such a robot on the moon. Future beneficiaries of such tele-operated surgery could include not only astronauts and military casualties but anyone who needs attention by a surgeon when the hospital is a long way away.

Those who believe they’ve been abducted by aliens and subjected to medical testing, however, might wish to ask for a sedative or a blindfold before a knife-wielding robot is positioned above them.

(Photo from NASA via SRI International.)