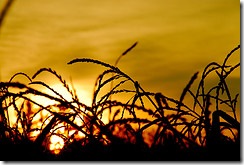 We’ve been hearing a lot about the potential of biofuels, particularly ethanol, as being a great (and green) answer to our global dependence of petrochemicals. Which is true, to a certain extent.

The problem being that corn ethanol, while itself a cleaner fuel, is a horrendously climate-intensive crop, the cultivation of which may cause as many (if not more) problems than it solves … which is why we’d be wise to look at the numerous other sources for the same chemical (like algae, prairie grass and fast-growing trees) which won’t cause an environmental and economic trainwreck further down the line. [Via Worldchanging]

Of course, we’ll need to do something about the enticing boondoggle subsidies that are making corn ethanol such an enticing political playing piece first. [Image by Jpeg Jedi]