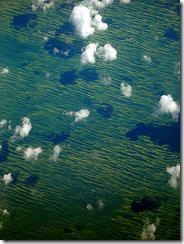 As Jamais Cascio and others have pointed out, geoengineering – large-scale technological projects aimed at averting the climate change crisis – should only be considered as last-ditch options, because they come with the risk of actually making things worse.

Take for example James "Gaia" Lovelock’s suggestion that we install hundreds of huge pipes in the ocean, with the aim of channeling nutrient-rich deep water to the surface to promote the growth of algae and (hopefully) absorb more atmospheric carbon dioxide. Lovelock himself admits that there’s a risk of the plan backfiring, but he says he’s worried enough that he thinks traditional scientific caution should be left behind. I hope he’s wrong – but even if he is, we could be doing a lot more to solve the problem than we already are. [Via BLDGBLOG] [Image by Jurvetson]