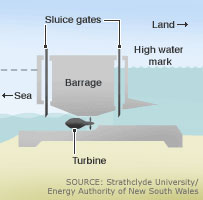 For 150 years there have been plans to build a barrage across the Severn Estuary, close to where I live in Bristol, England. Yesterday the government revealed a new detailed study into the possibility of such a construction in the near future. The barrier would cross the Bristol Channel from near the Welsh capital of Cardiff across to Weston Super Mare, south of Bristol. The 16km-long barrage could provide as much as 40,000 jobs and provide a rail link between England and Wales.

This is an exciting development. The distance between Bristol and the corresponding coasts on the other side of the Atlantic Ocean causes a resonant frequency in the tides, causing one of the biggest tidal shifts in the world. If this plan were to go ahead it could provide 5% of all of the UK’s electricity demands. There are environmental concerns about wildlife but the formation of a cleanwater lake beyond the barrage may also create new habitats. Another option is a series of tidal pools such as the one being proposed as a test site near my hometown of Swansea.

{image from the bbc article}