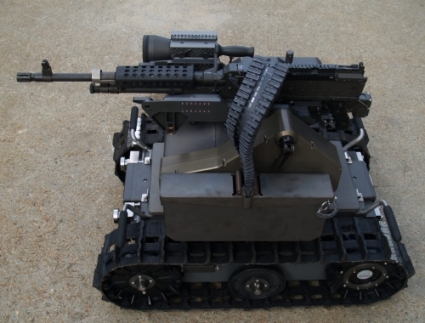 While the U.S. Army has been experimenting with the SWORDS robots in “real world” situations in Iraq, the company that made them has been working on the next generation of killbot, dubbed the MAARS (Modular Advanced Armed Robotic System). Apparently safety has been the Army’s chief concern when it comes to employing mechanized killing machines. The new MAARS robot apparently has added enhanced safety features, such as not letting the robot shoot the operator:

The robot is also equipped with a GPS transmitter, so it can be seen on — and tap into — the American battlefield mapping programs, just like tanks and Humvees. These “Blue Force Trackers” have been credited with dramatically reducing friendly-fire incidents during the Iraq war. MAARS comes with an extra fail-safe, which won’t allow it to fire directly at its own control unit.

3 thoughts on “Next generation killbot has more safety features”