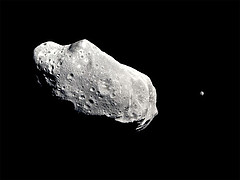 Last week here on Futurismic there were some great comments over the future of space seen from a resource rather than an expedition point of view. I mentioned in my post my hope that asteroids may in future be a good source of precious metals such as platinum. Today I stumbled across an example of how that may be done. Aside from the cheesy music and voiceover, this video from Space.Com shows Nasa planning of how to utilise the new Orion Moon landers to travel to Asteroids passing near to Earth’s orbit. By combining this style of approach with a few unmanned surveys of the composition of the NEO (near earth object), it may be possible to start harvesting precious metals that even a few tons would greatly increase current levels.