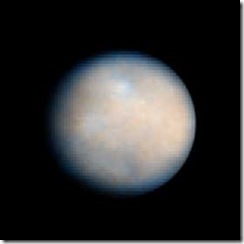 An interesting post over at Colony Worlds suggests that the dwarf planet of Ceres would be a better bet for early human colonisation than Mars – it has supplies of water ice and valuable minerals, but a far shallower gravity well, making it a more viable proposition from logistical and economic perspectives. Personally, I think getting a few working orbital colonies around our home planet would be a sound first move … but after that, why not? [Image from Wikipedia]