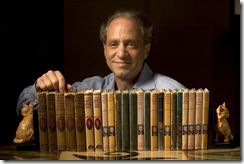 Tired of technophobic portrayals of Artificial Intelligence in movies? Convinced that the Technological Singularity is more than just "The Rapture of the Nerds"? Then you’ll be looking forward to the movie that Singularity advocate and inventor Ray Kurzweil has in the works. Based on his book of the same title, "The Singularity Is Near" will be a blend of documentary interviews and science fictional narrative, intended to communicate Kurzweil’s ideas about the near-future destiny of mankind and its machines. [Via AdvancedNanotech] [Image from KurzweilAI.net]

One thought on “Ray Kurzweil takes the Singularity to the movies”