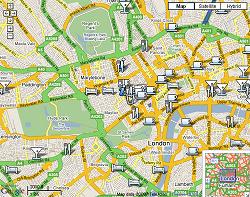 Here in the UK the FON network is gradually reaching a point where people are aware of it. The company asks users to siphon off part of the wireless internet on their router and offer it up as a wireless node for other users. This can be done in the ‘Linus Torvald’ way of linux and be free or in the ‘Bill Gates’ way, giving the router owners a small cutback.

Back when the idea first came around there was little traction – the software wasn’t compatible with most routers and ISP. Meanwhile, most wireless nodes were incompatible with each other and you had to shell out a load of money to use each one. Now with ISPs like BT coming on board with the idea and many other wireless networks springing up all the time, it looks like much of the UK will have wireless access before too long. With content from the BBC becoming freely available over wireless nodes, it looks like complete connectivity throughout the country will be a reality sooner rather than later. Use this handy Londonist map to find free wireless points in London. By making the internet more freely available and decentralised we can use web 2.0 products that are less dependent on infrastructure, encouraging non-profit web solutions that benefit everyone.

[via BBC News, photo by Londonist via Matt From London]