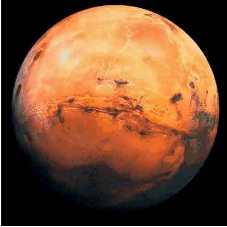 Anyone who has been following the recent missions to Mars are familiar with the ongoing speculation about if and how much water might exist on the Red Planet. This is an extremely important question, because the presence of easily accessible water would mean that future manned missions to Mars could use that water to produce fuel once they arrive – rather than having to bring it with them. Canadian scientists appear to have answered the “if” question, now it just remains a question of “how much.”

Canadian researchers have discovered that a white, salty substance churned up by the Mars Spirit rover is the first “on-the-spot” evidence of water just beneath the surface of the Red Planet.

The discovery by physicists at the University of Guelph is the first solid proof based on soil samples, and reinforces earlier evidence from satellite images suggesting water lies trapped under the barren landscape.

One thought on “‘Strong proof’ of water found on Mars”