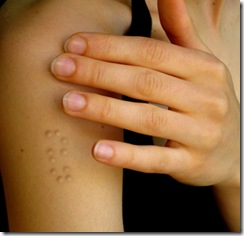 While we’re still a way off from being able to meaningfully extend the functional capabilities of the human body through elective surgery (at least affordably), there’s still plenty of more cosmetic tweaks available. But the lines between personal decoration and function can be blurred, especially when art comes in to play – like this "haptic tattoo" concept from the digital media art department of Berlin University, which could theoretically allow people with restricted or low-function vision to parse information about a person by touch. Granted, it’s not a use that I can envisage a huge demand for, but the concept is interesting – and as a body-modder of sorts, it’s refreshing for me to see things like sub-dermal implants being taken seriously by academia, as opposed to being castigated as a form of primitivism. [Via Technovelgy]

One thought on “Haptic body-hacks – the braille tattoo”