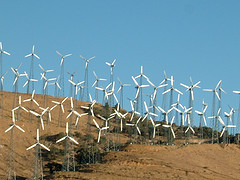 Climate scientists released a scary report this week saying that global warming is likely to be both ‘stronger than expected and arrive earlier than expected’. Since 2000 large spikes in releases of the gas have seen the amount in the atmosphere grow much faster than expected when the Kyoto treaty was drawn up in 1990. The principle reasons for this increase include the growing economy, China’s increased use of coal and most worryingly, a decrease in the amount of absorption by the world’s natural ‘sinks’.

The UK and New Zealand have both had news stories this week with ministers seeking to go back on ‘unrealistic’ Carbon emission cuts. The problem for all these countries is as the world economy is in such a delicate balance right now (and always, you could argue), to be the first one to start making the drastic changes neccessary means a massive hit to your economy and job market. 12 States including California and New York are sueing the US government for failing to do enough about the problem. All across the news, there are gloomy tales of doom if we don’t change but very little positives highlighted of changing to a less energy intensive future.

SF Writers have a huge part to play in all this. I’m not saying we should all run off and become Mundane. However, science fiction has a capacity to inspire unlike any other genre – just look at the Space Race to see the dreams of the genre in action in the real world. At the moment people understand global warming is a problem. They just don’t have an image in their head of what can replace the current state of affairs. Most of the books that deal with climate change are overwhelmingly apocalyptic, offering no respite and little hope. If we as SF writers can paint a picture of a future where we have adapted to the problems globalisation has caused us without the world ending or life becoming depressingly morbid, we can achieve something that few people are able to do. We can stop scaring people into change and start inspiring them.

[story via the new Guardian America site, image by alasam]