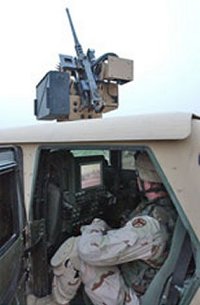 Traditionally, vehicle mounted weapon systems required the operator to be exposed, usually with his head and shoulders sticking out of the top of the vehicle. Obviously this presents an enticing target to the enemy. To overcome this deficiency the US military has developed CROWS (common remotely operated weapon stations). With CROWS, the gunner is inside the vehicle, and observes his surroundings using video cameras with night vision and telephoto capabilities. CROWS also has a laser rangefinder and a stabilization mechanism that allows more accurate fire while the vehicle is moving. But it turns out that the real reason CROWS has been successful is that today’s soldiers grew up playing video games, very similar to the CROWS experience:

Since many troops have years of experience with video games, they take to CROWS quickly, and very effectively. That’s one reason, not often talked about, for the success of CROWS. The guys operating these systems grew up playing video games. They developed skills in operating systems (video games) very similar to the CROWS controls. This was important, because viewing the world around the vehicle via a vidcam is not as enlightening (although a lot safer) than having your head and chest exposed to the elements, and any firepower the enemy sends your way. But experienced video gamers are skilled at whipping that screen view around, and picking up any signs of danger. The army even has a CROWS trainer built into its America’s Army online game.