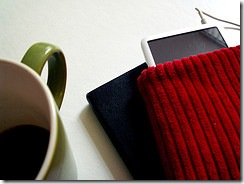 Now this is just a great idea, plain and simple – clothing made from fabrics with piezo-electric materials embedded in them, which will generate electric current as a result of the flexing produced by the wearer’s motion. The project has been sponsored to the tune of AUS$4.4million by the Australian Defence Department, and the potential for military applications is obvious enough, but the same technology would be very lucrative in the commercial sector too. Of course, it’s not in the bag yet – the researchers behind the idea suggest a viable product may be ready in four or five years – but the day when I can travel without having to pack an arsenal of batteries and wall-warts can’t come soon enough. [Via SmartMobs] [Image by Mgus]