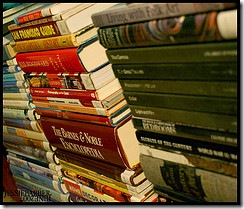 Chris Anderson, editor-in-chief of Wired and the man behind the Long Tail hypothesis, takes a look at Scott "Dilbert" Adams as a case-study in the effects of giving away free content. In a nutshell: you can’t always expect a free e-book to promote sales of the hardcopy version, at least not if you’re already well-known, but the increased profile it brings should get you more income from other work.

This is an issue close to the hearts of many sf authors, which seems to be the one field of literature that is really running with the "free novels" ball. Cory Doctorow’s career certainly hasn’t been harmed by it … but then he started out by giving it away, and it’s still too early in the game to be entirely sure how effective a strategy it will be in the long run for writers with established careers. Will those established careers be undermined by the new turks and their freebies, or will the industry benefit as a whole from an influx of new readers?

One thing’s for sure, the economics of the writing business is changing fast. Witness the Hollywood writer’s strike … which Techdirt suggests may backfire quite badly. [Image by Jessie Barber]

3 thoughts on “Free, but not easy – the economics of abundance”