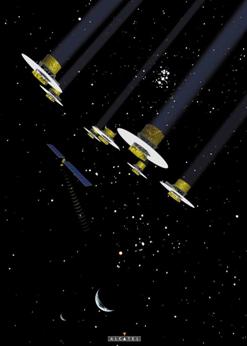 Astronomers have discovered a planet in the 55 Cancri system that orbits constantly in what is know as the ‘habitable zone’ of the solar system. Although the planet is a gas giant some 45 times the size of Earth, there’s a good chance one of its moons might have liquid water and hence encourage the development of earth-like life. Planets are found by studying their transits across the light of a star. By studying the amount the star dims when the planet crosses, the size of the planet can be estimated. This is limited to larger planets currently but future missions like the Kepler and Darwin projects may be able to find rocky planets like our own.

The search for ‘exoplanets’ outside our solar system is hitting its stride and regularly more are found. Whilst the planets found to date are all ‘Jupiters’ like the gas giants further out in our home system, we know that Jupiter, Saturn, Neptune and Uranus all have large satellites. If any of these were in the habitable region where Earth is, the possibility of liquid water and hence bacterial life would be likely. If 55 Cancri did support life on one of its moons it would resemble the world of Coyote in Allen Steele’s excellent series.

[via the guardian, image of Darwin project via Astronomy Online]