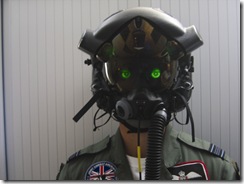 Unlike modern fast jet aircraft the Joint Strike Fighter, which is planned to replace the famous Harrier, does not have a ‘traditional’ head-up display – instead the computerised symbology is displayed directly onto the pilot’s visors.

This Helmet Mounted Display System provides the pilot with cues for flying, navigating and fighting the aircraft. It will even superimpose infra-red imagery onto the visor which allows the pilot to ‘look through’ the cockpit floor at night and see the world below.

It’s being developed by Vision Systems International and Helmet Integrated Systems, and is currently being evaluated by defence scientists at Boscombe Down in Wiltshire.

As you can see from the photograph, it also makes anyone wearing it look wicked cool. Or maybe just wicked. (Photo from U.K. Ministry of Defence.)