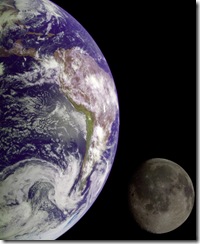 New observations from NASA’s Spitzer Space Telescope suggest that moons like Earth’s are rare across the universe, occurring in only five to 10 percent of planetary systems at most. (Via Science Daily.)

The observation is based on the belief that the moon was born when the infant Earth was clobbered by something the size of Mars (shades of Velikovsky, except he had collisions like that that happening in historical times). Astronomers don’t see the amount of dust around other stars they would expect to see if those types of collisions were common.

This could have an impact on the likelihood of land-based life on other planets, since life may have moved from the ocean to the land on Earth due to the tides the moon induces. And here’s another question: would we have dreamed of travelling to other worlds if we hadn’t had one hanging so conveniently close in the night sky? Without a moon, would other civilizations ever develop space travel? (Image: NASA.)

Here’s an even more alarming thought: without a moon, think how differently science fiction would have developed. It might not even have developed at all.

And worse yet, what would songwriters have done without a moon to rhyme June with?

Why, the mind boggles.

UPDATE: Here’s an article from Astrobiology Magazine examining what Earth would be like "If We Had No Moon."