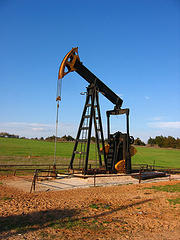 Peak Oil is a worrying topic but one that is complicated and based on many factors. Even if Hubbert’s predicted peak of oil isn’t close to happening and there are lots of barrels left in the earth, a plateau of oil production, which a lot of oil companies are saying looks likely around 2012, is likely to have a similarly heavy impact on economic growth and prosperity.

The oil taken so far has been mostly the easiest to extract. Whilst large swathes of oil lie locked away in places like the Venezuela Orinoco Belt and the Canadian Oil Sands, they are harder (and more expensive) to get. Added to the slowing of many major crude sources, these facts have led a lot of oil experts to predict the production of oil will slow and plateau, probably never reaching 100mbpd. With China and India increasing demand, we’ll be needing more than that in ten years time. What happens if the supply can’t keep up?

[via wired, image by jGregor]