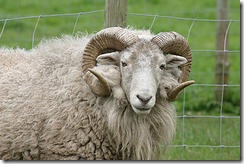 Biological warfare would appear to be a much older idea than we thought. New translations of ancient Middle Eastern texts suggest the Hittites had hit upon the idea of weakening their enemies with diseases by sending them rams “cursed” with a bacterial infection called tularemia – over 3 millennia ago. Tularemia is still a potentially lethal agent today … whether or not a sheep would be a successful delivery system in our modern age is an unknown quantity, but I wouldn’t be surprised if there were parts of the world where it could still be very effective. [Image by Dave-F]

On a lighter note, I can’t help but be reminded of the Sheep Cannon from the hilarious and addictive Worms computer games.