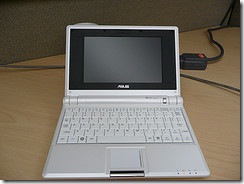 Charlie Stross has been shopping – and he’s pretty impressed with the Asus Eee notebook he bought. Not because it’s particularly powerful (which by current standards it isn’t, really) but because he feels it represents a turning point in the commoditization of computer technology:

“The Eee isn’t an order of magnitude cheaper than a normal laptop but it is close to an order of magnitude cheaper than previous ultra-lightweight subnotebooks. And I think I’m going to use it as a pointer to a future trend in the computer business, at the low end. The Eee is about 8 times as powerful as that 1998 Omnibook, at a quarter the price. That’s an improvement of half an order of magnitude in one direction and close to a full order in the other. And it’s a tipping point, I think, showing that the price points that have defined the goal posts for the personal computer business aren’t set in stone.”

As Stross points out, client-side power is becoming less necessary as well as cheaper – at least outside of boutique markets like the one Apple has staked out for itself. And this is a good thing, surely? Well, it would seem so at first. But with the science fiction writer’s instinctive “what if?” chops, Stross looks beyond the immediate:

“… how deep will be the recession that follows once the personal computing industry deflates to its natural value (i.e. peanuts)?”