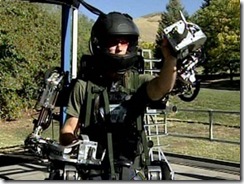 It’s not quite the loader that Ripley uses to ass-kicking effect in Aliens, but it’s a (mechanically augmented) step in the right direction. A robotics startup called Sarcos has been demoing a prototype robotic exoskeleton that mimics the movements of its human operator while amplifying his (or her) strength. Don’t rush off to your local recruiting station just yet, though – Sarcos estimates a five year development process before the suit is ready to rock. There’s a video if you want to click through on the link, by the way. [Via OhGizmo!][Image lifted from linked article]

3 thoughts on “Military exoskeleton prototype – mech-warriors in the offing”