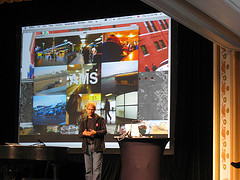 Artist Hasan Elahi was wrongly arrested by the FBI in 2002. He found if he called and told them before each of his many flights, he wasn’t troubled again. So he decided to beat Big Brother in the most brilliantly counter-intuitive way – by photographing everything about his life.

Elahi uploads hundreds of photos a day and a tracking bracelet on his ankle gives a constant update of his wherabouts. So it seems the way to stop overzealous intelligence agencies falsely accusing you is to give them all the information about everything you do, all of the time.