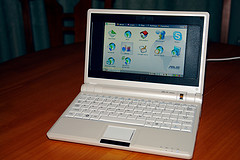 A lot of the plans for sustainability try to provide the energy for what we already do using new sources of power. Whether you subscribe to the peak oil camp or you fear global warming or even if you want to prudent ahead of a possible recession caused by sub-prime mortgages, each problem has the same solution: use less. Buying less consumables, reducing food miles, rebuilding soils and producing electricity from renewables can only do so much.

Transport is a huge part of the energy (and money) we spend. A future coming to terms with the ‘Peak Century’ will need to travel much less distance for work, play and neccessity. The 50 mile commute seems illogical now at close to $100 dollar a barrel of oil. If oil gets harder to extract and prices rise, that commute won’t just be an annoying expense, it’ll mean bankruptcy. Fortunately new technology has arrived, seemingly perfect timed to coincide with reducing our carbon footprint and energy consumption.

A geologist recently said “My hopeful view is that we’ll be living like we did at the turn of the 20th century, but with computers.” I like the analogy. The internet and low-energy computers offer us a real potential of making a low carbon economy yet still providing jobs and a worldwide community. As Worldchanging puts it, the ‘High bandwidth, Low Carbon future’ could be both sustainable and more personally fulfilling. Google is investing $100Million in Green computing and the Asus EEE laptop uses 11 watts. All this talk of choose your own price music, online markets for fiction and e-readers is important because it’s a first step to creating an entertainment economy that could work in the low-energy world that’s coming, sooner or later.