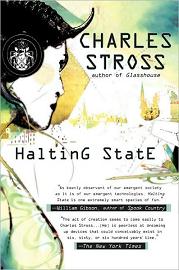 As he closes in on the deadline for his latest book, science fiction author John Scalzi has been including guest posts on his blog Whatever, by a different author each day. A few days ago he posted a great article on space by Charles Stross:

“Optimistic projects suggest that it should be possible, with the low cost rockets currently under development, to maintain a Lunar presence for a transportation cost of roughly $15,000 per kilogram. Some extreme projections suggest that if the cost can be cut to roughly triple the cost of fuel and oxidizer (meaning, the spacecraft concerned will be both largely reusable and very cheap) then we might even get as low as $165/kilogram to the lunar surface. At that price, sending a 100Kg astronaut to Moon Base One looks as if it ought to cost not much more than a first-class return air fare from the UK to New Zealand … except that such a price estimate is hogwash. We primates have certain failure modes, and one of them that must not be underestimated is our tendency to irreversibly malfunction when exposed to climactic extremes of temperature, pressure, and partial pressure of oxygen.

While the amount of oxygen, water, and food a human consumes per day doesn’t sound all that serious — it probably totals roughly ten kilograms, if you economize and recycle the washing-up water — the amount of parasitic weight you need to keep the monkey from blowing out is measured in tons. A Russian Orlan-M space suit (which, some would say, is better than anything NASA has come up with over the years — take heed of the pre-breathe time requirements!) weighs 112 kilograms, which pretty much puts a floor on our infrastructure requirements. An actual habitat would need to mass a whole lot more. Even at $165/kilogram, that’s going to add up to a very hefty excess baggage charge on that notional first class air fare to New Zealand — and I think the $165/kg figure is in any case highly unrealistic; even the authors of the article I cited thought $2000/kg was a bit more reasonable.”

I encourage everyone to read the whole thing (and the other insightful posts by Scalzi’s guest writers) and also to check out Stross’s Halting State, which left me highly impressed.

[link and image via Whatever]