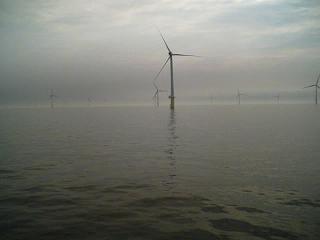 The Secretary of State for Business, John Hutton is announcing a huge sea-change in the UK’s approach towards future power plants, with a massive 25Gw of offshore wind proposed to add to an existing 8GW of planned construction. This vast increase in wind power, in addition to the wave and tidal projects being tested in the Orkney islands, could power all of the UK’s homes by 2020.

It’s interesting to see this being portrayed not only as an environment issue but as a security issue, with Hutton saying:

“I do not want in 20 years’ time to find that whether the lights go on in the morning is down to some foreign government or someone else.”

With the North Sea oil and gas fields decreasing rapidly in production, the UK is losing its resource power. By investing in new renewable technology it can continue to be an important world power. Denmark invested in wind over the last decade and now has a £2billion industry. If only more nations would have this level of foresight.

[story and picture via European Tribune]

UPDATE: As requested in the comments, here is a more up to date (and more detailed) analysis of Danish wind power and their plans up to 2030.