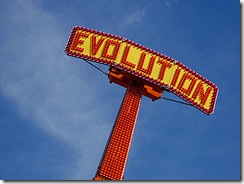 Thanks to the magic of the wire services, this story is all over the web like a rash – you can read the abstract of the paper that’s caused the hoo-haa on the blog of John Hawks, one its authors.

But the nutshell quote is this one:

“The massive growth of human populations has led to far more genetic mutations, and every mutation that is advantageous to people has a chance of being selected and driven toward fixation. We are more different genetically from people living 5,000 years ago than they were different from Neanderthals.”

As an early commenter points out on the inevitable MetaFilter thread, faster evolution doesn’t mean we’re improving as a species, because evolution selects for ‘reproductive fitness’ rather than any quality that we might describe as being ‘better’ from a rational point of view.

But it’s an interesting story nonetheless; I’d always thought evolution was a glacially slow process. I guess we’ll have to wait and see what the implications are … not to mention the spin that the ‘Young Earth’ folk will try to put on it. [Image by KevinDooley]

2 thoughts on “Humans are evolving faster than ever”