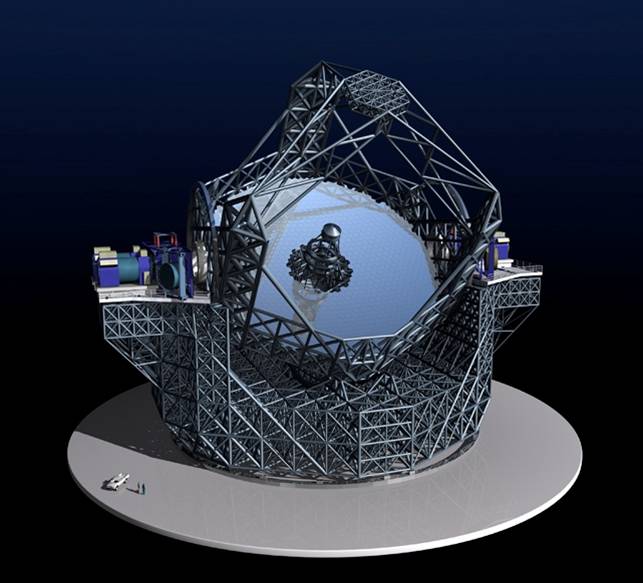 As astronomers look further back in time, they need more powerful, higher resolution instruments. As well as the search for extrasolar planets, one of the key areas the new technology will be looking at is the epoch of reionisation, some one billion years after the big bang. 400,000 years after the big bang, the universe cooled enough to become opaque, so that very little light was being emitted for us to observe. Later the universe began to change and objects like stars and galaxies formed. The heat from these first objects began ionising the neutral gas of the universe, creating more stars and galaxies in bubbles of hotter regions that eventually spread to form the reionised universe we see today.

Some of the designs for new telescopes are incredible. The picture shows the E-ELT, one of the new designs of Extremely Large Telescopes (anything over 20m in diameter). The small white shape in the bottom left is a car! The awesome James Webb Space Telescope will launch in 2013 to replace the Hubble Telescope. Its mirror and tennis court-sized sunshield unfold in space once it reaches its home orbiting L2, some 1.5 Million km from Earth. ALMA, LOFAR and SKA will links tens or even thousands of smaller radio telescopes together as one massive array, stretching out across continents. The next decade will truly be a revolution in the devices astronomers use to study the sky.

One thought on “Reionisation and the future of telescopes”