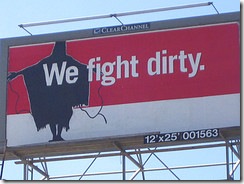 The ongoing efforts of the advertising industry to make it impossible to escape from promotional material for products that no one really needs continue apace, with the full weight of modern technology behind them.

Warren Ellis points us at a report about a billboard that uses a technique called “audio spotlighting” to beam sound directly into your head … the only redeeming feature of which is the thought of the fun that culture jammers will be able to have once they figure ways of hacking them. [Image by rick]

Of course, the real frontier of advertising is right here on our beloved intarwebs, and it appears that some ISPs are keen to have a piece of the pie that Google has baked for itself. So some of those ISPs are selling your clickstream data to a company called NebuAd to make it easier to target you with “appropriate” ads. Nothing like a captive data-set to boost accuracy, eh?

Not quite as cheeky as a Canadian ISP called Rogers, though, who’ve been plastering their own ad content on Google’s homepage. That’s probably going to backfire, but if you look at it as a proof-of-concept job, it’s plain to see that web ads aren’t going to get any less intrusive any time soon – can you say “digital turf-war”?

On the subject of Google, recent research suggests that Google’s PageRank algorithm is actually a pretty good model of the way the human mind determines the relative importance of related concepts, and may provide a new route forward for artificial intelligence. How ironic would it be for us to reach the Singularity only to discover that the omnibrain of the human species is essentially interested in selling us things …