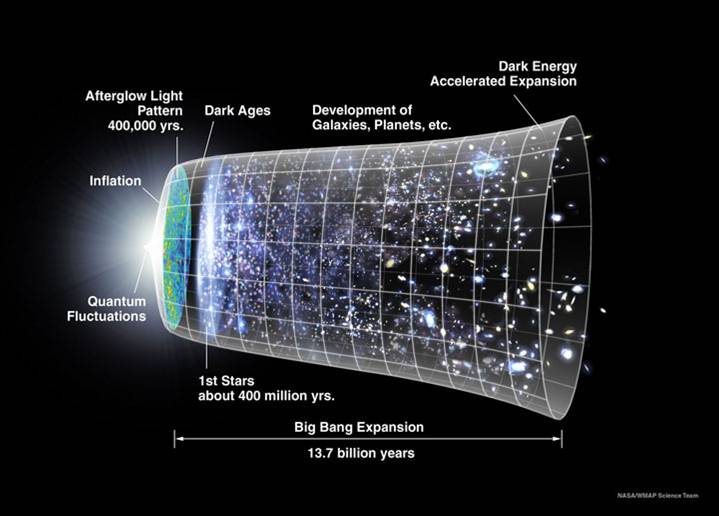 On Wednesday I talked about reionisation and how many of the new telescopes being designed are to study this side of astronomy. But what exactly does this mean? Well, ionisation just means that the electrons of an atom are separated from the protons and neutrons. This usually requires a lot of energy, especially if it occurs over a large area. When the universe began after the big bang (the far left of the picture), everything was close together and extremely hot. For a while even the quarks that make up protons and neutrons were independent of each other. Over time the universe grew and the temperature decreased. Quarks recombined into particles, electrons recombined with protons, leaving us with mostly neutral hydrogen, all across the universe.

Now, astronomers can’t see much from neutral hydrogen. It’s too cool to emit much EM-radiation as light, infra red or radio waves that telescopes can pick up. Today, however, we see lots of radiation – from stars, galaxies, black holes, quasars and ionised gas. If the universe was neutral 12 billion years ago, what caused it to reionise? Probably, the first stars caused this change. Over huge periods of time tiny variations in the density of the universe caused the hydrogen to collapse into stars, whose light then ionised the regions around them. By studying the ‘bubbles’ of ionisation so long ago we can work out why the universe has the structure we see today.

Astronomers have never seen that far back before in the key Radio and Infrared regions. The telescopes of the last fifty years just don’t have the power, as Scotty might say. The further back through time you want to look, the further the light has to travel and the fainter the signal. With the advances in computer technology over the last twenty years, we can finally start building equipment capable of seeing those first stars and galaxies. If people are interested, I’ll post the occasional update on how telescopes like JWST and SKA are progressing.