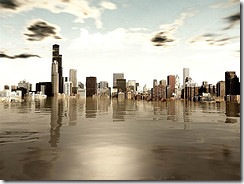 Jamais Cascio has been having some unsettling thoughts about the potential of geoengineering technologies to provide nation-states with subtle yet powerful alternatives to conventional warfare:

“Geoengineering as a military strategy would appear to offer a variety of benefits. Research can be done out in the open, taking advantage of civilian work on anti-global warming geoengineering ideas. If my argument that nuclear weapons and open-source warfare have made conventional warfare essentially obsolete is correct, climate-based warfare would offer an alternative non-nuclear weapon, one that would be out of the reach of non-state actors. And the more we learn about how human activities alter the climate — in order to alter those activities — the more options might open up for intentionally harmful manipulation.”

Yikes. How’s that for taking the edge off your new year optimism, eh? 😉

Still, it strengthens my theory that nation-states are a root cause of a lot of the challenges we face. Call me a hippie if you will, but isn’t it high time we got over this arbitrary geographical factionalism and realised we’re all in the same boat? [Image by Cikaga Jamie]

2 thoughts on “Geoengineering – a new form for warfare?”