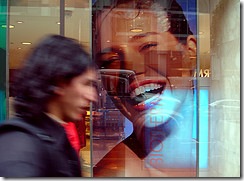 That’s a question I’ve asked myself more than a few times, and I’ll bet you have too. Danah Boyd also wants to know who actually clicks on internet adverts:

“A few years back, I asked this question to someone who worked in the world of web ads and I received a snarky (and condescending) answer: middle America.”

As sweeping a stereotype as it may be, it’s backed up by research done by AOL’s marketing people:

“Who are these “heavy clickers”? They are predominantly female, indexing at a rate almost double the male population. They are older. They are predominantly Midwesterners, with some concentrations in Mid-Atlantic States and in New England. What kinds of content do they like to view when they are on the Web? Not surprisingly, they look at sweepstakes far more than any other kind of content. Yes, these are the same people that tend to open direct mail and love to talk to telemarketers.”

Which leaves Ms Boyd asking questions about the ethics of advertising:

“I am not an advertiser and I’m not invested in making better ads. Instead, by raising this topic, I’m curious whether or not web marketing is capitalizing on a niche group and, if so, what the societal implications of this might be? If my hypothesis were true, what would it mean if marketing is profiting primarily off of those who are economically and socially struggling? How do we feel about this philosophically, ethically, and professionally? Would we feel proud of living off of a business model that targets the poor?”

It’s an interesting question – but I’m left wondering whether it’s really any different from the non-web ad industry. Hasn’t advertising always been designed to bamboozle the easily-led? But to extend Ms Boyd’s thoughts further, as the web moves inevitably towards being funded entirely by advertising, will it become the victim of its own success? [Via SmartMobs] [Image by Michale]