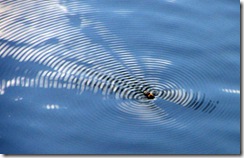 It’s remarkable how often science advances by one scientist hear some other scientist say, “Such-and-such is impossible!”, responding, “Oh, yeah?” and then proving the first scientist wrong.

That seems to be what’s happened at Duke University, where Steven Cummer read a research report suggesting that it was impossible to build a 3-D acoustic cloak, a device that would make whatever was inside it disappear from sound waves. (Via ScienceBlog.)

Cummer and associate David Schurig had already reported a theory showing that a two-dimensional cloak as possible, and Cummer refused to believe that a 3-D cloak couldn’t also be built, especially considering researchers already know that a cloak invisible to electromagnetic waves is possible, and in fact have built one that operates at microwave frequencies.

“In my mind, waves are waves,” he said. “It was hard for me to imagine that something you could do with electromagnetic waves would be completely undoable for sound waves.”

So he sat down and figured out how such a cloak would work, and has shown that, in theory at least, it’s entirely possible to create an inaudibility cloak that allows sound waves to travel seamlessly around an object and continue on their way without distortion. With such a thing (which would have to be built from exotic metamaterials), you could build a stealth submarine that couldn’t be detected by sonar, or improve the acoustics of a concert hall by removing distortion caused by pillars or support beams.

And if you can build cloaks for electromagnetic and sound waves, what about other waves? How about structures unaffected by seismic waves, or boats unaffected by ocean waves?

The researchers’ full paper will be published in the January 11 Physical Review Letters.