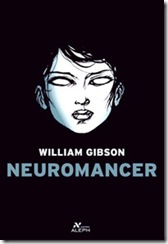 I have a bad relationship with the movie industry – they have a terrible habit of taking books I love and murdering them on screen. I had a rant about it when I first heard someone had optioned William Gibson’s Neuromancer, but Jason Ellis has just pointed out the fact that they’re actually casting it already.

Being somewhat detached from the cinema world, I have no idea who Hayden Christensen is, or whether he’d be any good as Case (or indeed as anyone). But there’s a microcosm example of why good books die when they leap to celluloid, in the commentary at this film fan site where Ellis found the news:

“I’ll be honest and admit I’ve never read NEUROMANCER and my rudimentary attempts to try and understand the plot have only confused me. But it seems very much a precursor to the Matrix with the book even referring to “the matrix.”” [my emphasis]

Anyone care to suggest a book-to-film conversion that really worked, with the obvious (and in my opinion unique) exception of Blade Runner?

26 thoughts on “Neuromancer to be butchered for cinema?”