This should give your head a pretty good twisting for a Monday morning. 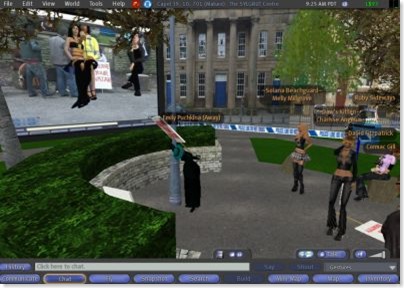 I’ll let Wagner James Au explain it, because I can’t condense it any further and still get the story across:

“… last October in Manchester, a big screen display was set up in All Saints Gardens; the park was also recreated in Second Life.  Meanwhile, video cameras in the real park record people who are there, and that live footage is merged in a chroma mixer to video captured in the SL version of All Saints.

As Au points out, there’s a whole lot of reality layering going on right there.

“Liberate Your Avatar” was a public art installation by Paul Sermon designed to “expose the identity paradox in Second Life” – you can read more about it at the project’s website (which is where the image above has been borrowed from).