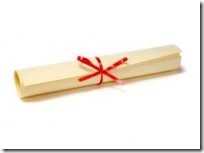 Talk about cognitive dissonance – I thought I was still asleep and dreaming when I heard on the radio this morning that three large corporate employers (including a certain well-known fast-food chain) have been granted the right to act as examination boards by the UK government. This means they can grant their employees qualifications which (theoretically) have value beyond the walls of the company where they were earned, unlike many current vocational qualifications. [Image from stock.xchng]

I expect that, certainly at first, an A-Level in McManagement won’t be worth the paper it’s written on, except with similar employers – but if the scheme sticks, that will probably change. You could probably argue that more people will end up with qualifications if there’s the financial incentive of receiving a working wage while earning them.

But what if this is the thin end of the wedge? What if, in a few decades, kindergartens and primary schools are run (or sponsored) by corporate interests? In a climate of growing deficits, it’s not that unlikely a scenario – and we’ve already been softened up to the idea by supermarket vouchers-for-equipment schemes. But then again, there’s little difference between governments and corporations as it is … once again, Snow Crash seems eerily prescient. Or am I just engaging in knee-jerk cyberpunk paranoia?
[tags]corporate, training, education, qualifications[/tags]