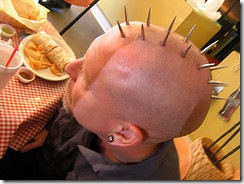 I really fell out with my parents over my body-mod efforts, as tame as they are by some standards. “It’s not natural,” my mother would say. “You’re marginalising yourself into a small group of people who aren’t content to leave their bodies the way they are.” [Image by UnsureShot – no, that’s not me in the picture.]

Not such a small group after all, mother dearest – research suggests the British have spent over $1billion on cosmetic surgery in 2007 alone. [Via grinding.be]

Of course, they’re spending that money chasing after an unattainable media-manipulated conception of perfect beauty, which is still more socially acceptable than investing a few hundred dollars a year in having permanent pictures drawn on you and holes punched through various parts of your anatomy … horses for courses, I guess.

But whichever way you cut it, body modification of one type or another is becoming very commonplace. So why are people still so aghast at the concepts of transhumanism?

3 thoughts on “$1billion spent on British cosmetic surgery in 2007”