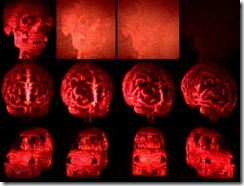 Scientists from the University of Arizona have figure out how to make holographic displays, viewable without special eyeware, that can be erased and rewritten in a matter of minutes. (Via PhysOrg.)

Dynamic hologram displays could be made into devices that help surgeons track progress during lengthy and complex brain surgeries, show airline or fighter pilots any hazards within their entire surrounding airspace, or give emergency response teams nearly real-time views of fast-changing flood situations or traffic problems, for example…and no one yet knows where the advertising and entertainment industries will go with possible applications…

The prototype display is only four inches by four inches and only comes in red, but larger displays in full colour are considered possible. The researchers are aiming for a one-foot-by-one-foot display next, then a three-foot-by-three-foot display. Eventually they hope to be able to display life-sized holographic images of humans that can be updated every few minutes.

The researchers point out that a great deal of data is lost when three-dimensional information, such as that collected by an MRI or CAT scan, is displayed in two dimensions on a flat computer monitor. As they say, “…when we develop larger, full-color 3-D holograms, every hospital in the world will want one.”

And two minutes after the first one is installed, hospital staff will be referring to the room it’s placed in as the “holodeck.”